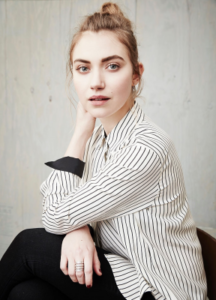 Right out of the gate, the China brothers’ noir-hearted sensibility was being compared to that of fellow film siblings Joel and Ethan Coen, as critics hailed the Australian writer-director duo’s debut “Crawl” as a modern-day “Blood Simple.” On the surface, their 2012 Black List-selected screenplay for “Sweet Virginia” dives further down that rabbit hole, featuring as it does a wife who hires a guy to bump off her own husband (a gender-flipped twist on the basic “Fargo” plot) and a hit man who’s as cold-blooded as “No Country for Old Men” killer Anton Chigurh.

And yet, going deep is what makes “Sweet Virginia” great — heck, more than great. As translated to screen by director Jamie M. Dagg (whose sure hand and smart changes elevate things considerably), Benjamin and Paul China’s script yields one of the gnarliest and most unsettling movies we’re likely to get this year. Set in a remote corner of Alaska, this small-town, blue-collar thriller is surprisingly cast, exceptionally well acted (male leads Jon Bernthal and Christopher Abbott might have easily switched roles, though it’s far more effective in this arrangement), and executed potently enough to leave a lasting impression, like scar tissue after a serious burn.

Let’s face it: Most Coen brothers knockoffs aren’t very good. There’s something far too squirrely in the siblings’ wickedly funny, regionally infused sensibility to be replicated, and nearly everyone who tries falls flat. But “Sweet Virginia” is a dark batch of backwoods whiskey, as Dagg capably distills what works best in other genre movies (not just the Coens’, obviously), recognizing atmosphere and psychology as this elixir’s most vital ingredients. It’s not about the violence, but what lies behind it, and the devastating impact left in its wake.

The movie opens with a brutal killing, as an outsider cruises into town, lurking in his car outside a local bar till well after midnight before bursting in on a friendly card game and murdering all three men in the establishment, taking money from the register practically as an afterthought. What have they done to deserve this? And who is this monster, who brings violence to a community that needs guns only for hunting, changing the entire dynamic of a town so small that everyone (believes he) knows everyone’s business already?

It was Dagg’s idea to relocate the movie to Alaska, though he kept the title, turning it into the element that Abbott and Bernthal’s characters have in common, allowing them to bond where otherwise each would probably keep to himself: Both have roots in Virginia, but have run off to Alaska for their own reasons. Strong yet soft-spoken, “The Walking Dead” star Benthal plays Sam Rossi, an ex-rodeo champ who now operates a spartan motel on what feels like the brink of the world. He’s a damaged-goods drifter catering to other drifters, running in place from some heartbreak he can’t quite forget.

As the hit man from the opening scene, Abbott comes across as even more of a cipher. He checks into Sam’s hotel under the name of Elwood, and reveals only fragments of himself to others — although the film privileges us by eavesdropping on a private moment in which he calls his ailing mother from the hotel room, offering a valuable insight into the torment that fuels his temper (a dimension overlooked in characters like Chigurh, where the less we know, the scarier they seem). 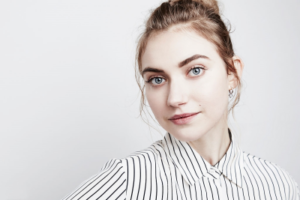 A few scenes after the killing, we learn what motivated it, as Elwood meets with Lila McCabe (Imogen Poots), the woman who hired him, on a scenic bridge. This could be a romantic setting, if the two characters weren’t such icy sociopaths. In Lila’s case, years of disrespect and misery have pushed her to ordering her husband’s murder. But for all her calculations, she hadn’t foreseen that others would be hurt in the process. Now she’s all kinds of desperate, worse off than before, and willing to jeopardize others’ safety to save herself — including that of a local friend (Rosemarie DeWitt) also left widowed by the shooting with secrets of her own to keep.

But this review already risks giving away too much. Much of the movie’s potency comes from the way it withholds certain information until just the right moment, and how the combination of several seemingly contradictory brushstrokes can render a character we perceived one way in a completely new light — although light is by far the scarcest resource on offer here.

“Sweet Virginia” is an uncommonly dark movie. Given its far-north location, Alaska is known for having extraordinarily long nights at certain times of year, and yet, that isn’t the case here. Even by day, the shadows seem to have shadows, as Canadian cinematographer Jessica Gagné creates a world of such murky moral contradictions, you have to squint at times to make out the shape-shifting personalities that lurk within. It’s an aesthetic that practically demands to be seen on the big screen, as few digital home theaters can handle the nuances of such darkness, nor the level of communion between audience and character that the movie demands.

It’s not so much that the story is complicated. It isn’t. Rather, there’s a level of subtlety operating here that defies the genre. When the violence happens, it’s intense, and the threat hovers over the rest of the movie (by following Elwood’s car into town during the opening scene, Dagg is able to create another high-tension set piece around the mere suggestion that the headlights Lila sees in her rearview mirror might be his). Even though the sense of menace grows so oppressive at times, you can hardly breathe for minutes on end, it’s the characters’ ever-evolving inner mechanics that fuel our engagement. We want them to survive, of course, but mostly, we want to understand them.

Ultimately, it’s this strange alchemy — the way that a terse script can leave so much unsaid, combined with such a talented ensemble’s ability to suggest all the details left either in silence or in darkness — that makes “Sweet Virginia” such a haunting character study. By shifting the China brothers’ script from Virginia to this remote frontier, Dagg has forged a connection not only to film noir, but also to the lawlessness of the Western. After all, what is a retired rodeo hero if not a cowboy who has hung up his spurs?