Imogen attended The IMDb Studio Presented By Intuit QuickBooks and the Collider Media Studio at the 2019 TIFF at Bisha Hotel & Residences on September 06, 2019 in Toronto, Canada. She looked great, love her outfit! We added high quality & medium quality photos from both of the appearances and we also added a few candids of her outside the Bisha Hotel to the photogallery, so be sure to check them out! Watch the Collider interview below & the IMDb one here!

2019 TIFF: Castle In The Ground Premiere

Imogen attended the “Castle In The Ground” premiere during the 2019 Toronto International Film Festival at TIFF Bell Lightbox on September 05, 2019 in Toronto, Canada. She looked beautiful and we cannot wait to get to see this movie! We added high quality & medium quality photos from the premiere and the after party and we also added a few candids of her outside the TIFF Bell Lightbox to the photogallery, so be sure to check them out!

The Son Press Night After Party

Imogen attended the press night after party for “The Son” at The Century Club on September 02, 2019 in London, England. I really like how she changes her hairstyle so often for film roles, and she looks great with each one. We added high quality photos from the event to the photogallery, so be sure to check them out!

As you can see, we freshened up the site’s design and it’s now responsive so hopefully you’re having an easier time navigating it on your smartphone or tablet. Again it’s time to go back to completing the photogallery. Today we added 2600+ HD screencaps from the 2013 film called The Look of Love, where Imogen plays Debbie Raymond, the lead character’s daughter. This film is a biopic, or more accurately inspired by real people and events and it focuses on Paul Raymond, the wealthiest man in Britain, who build a porn, entertainment and real estate empire. Imogen plays his beloved daughter who dreams of becoming a singer but unfortunately is introduced to drugs by her father. Her role is substantial, so if you like biopics, you may enjoy it. The film also stars Steve Coogan, Anna Friel and Stephen Fry. We also added 15 production stills, a behind the scenes photo, a promotional shoot photo and 4 posters to the photogallery. Take a look at everything!

The Art of Self Defense (First Still)

The Art of Self-Defense is hard to describe — even for Jesse Eisenberg, who uses words such as “strange,” “heightened,” and “unbelievably hysterical.” In the upcoming film from writer-director Riley Stearns, the Oscar-nominated actor stars as Casey, a timid loner who, after a violent attack, comes under the tutelage of a charismatic karate instructor simply named Sensei (Alessandro Nivola).  The Social Network star was initially concerned he was being offered another “typical nervous male protagonist role,” which he had no interest in repeating. 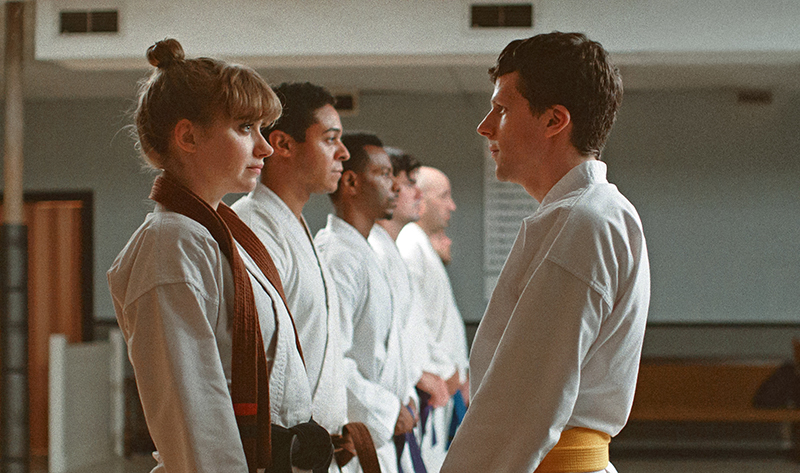 “It seems like it’s going to be a typical story of an average man finding his inner strength,” he shares. “And I didn’t want to do that kind of movie because I felt that I had done similar kinds of movies. But I thought the script was so funny that I just kept reading out of curiosity, and thank God I did, because the movie so brilliantly subverts that trope. It becomes this very unusual, surreal, but wry commentary on the absurdities of masculinity.”

END_OF_DOCUMENT_TOKEN_TO_BE_REPLACED

Here’s the first ever photo of Imogen Poots & Jesse Eisenberg in the sci-fi thriller Vivarium, directed by Lorcan Finnegan. Imogen plays a young woman who, along with her fiancé (Eisenberg) are in search of a starter home. In following a mysterious estate agent, they get trapped in a strange housing development. Deadline previously reported that Finnegan burst onto the film scene in 2016 with his debut feature Without Name, an ecological horror-thriller that premiered at the Toronto International Film Festival. 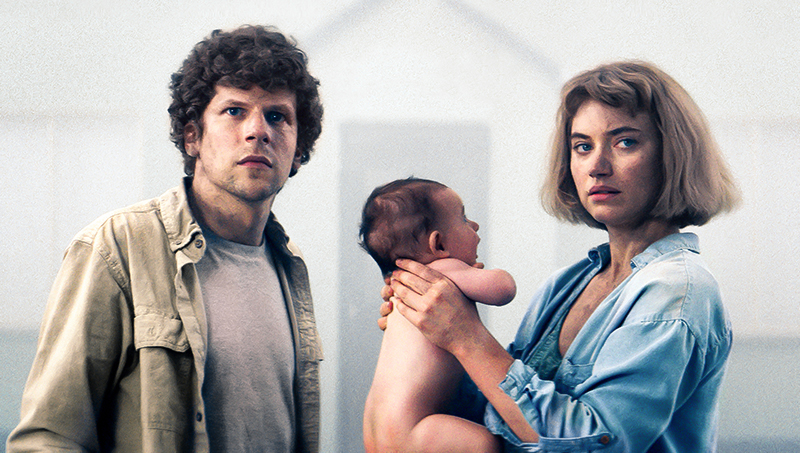 Imogen attended the 2019 SXSW film festival for the premiere of her upcoming movie “The Art of Self Defense” on March 10, 2019 in Austin, Texas. She looks so beautiful with the new dark brown hair color and the hair band, her make-up and outfit look great as well. We added high quality & medium quality photos from the events she attended to the photogallery, so be sure to check them out! Also added a candid of her outside the Atom Theater in Austin, Texas and a photo from a portrait session by P Sirota for Entertainment Weekly she did at the festival.

Hey all, happy new year! Since there are no new photos or news of Imogen, we thought it was time to go back to completing the photogallery. Today we added 2000+ HD screencaps from the 2012 film called A Late Quartet, where Imogen plays Alexandra Gelbart. This film, like the previous one we posted screencaps from, is also bittersweet, melancholic and music themed. The story’s about a string quartet that has wowed music-lovers with its skilled performances. However, as the musicians prepare to celebrate a milestone season together, a shocking announcement from one of the musicians changes everything. Imogen plays the daughter of one of the musicians, who wants to follow the same career path as her parents. Her role is decent, so if well acted life stories interest you, this film may be the right choice. The film also stars Christopher Walken, Philip Seymour Hoffman, Catherine Keener and Mark Ivanir. We also added 8 production stills and a poster to the photogallery. So take a look!

Page 2 of 9 « Previous 1 2 3 4 5 … 9 Next »
© 2013-2019 Imogen Poots Network   |   ImogenPoots.org   |   Theme by Sin21   |   Back to top   |   Homepage   |   Disclaimer & Privacy Policy Imogen Poots Network is a non-profit website. All images, video footage and other media are copyrighted to their respective owners, no copyright infringement is intended. We do not claim ownership of any photos in the gallery, all images are being used under Fair Copyright Law 107 and belong to their rightful owners. All other content and graphics are copyrighted to imogenpots.org unless otherwise stated. If you would like any media removed please contact us before taking legal action. Thank you!