Inveterate guzzlers beware: patrons are being actively discouraged from eating during this production of Edward Albee’s name-making marital-crisis drama of 1962, in order not to put off the actors or distract the audience.

Watching James Macdonald‘s superlative revival (marred only by the cattle-class lack of roaming space at the Harold Pinter theatre), however, you realise that this controversial move is actually a medical necessity. There’s every danger of mid-show scoffers either choking to death as they’re seized by convulsive laughter, or disgorging the contents of their viscerally churned-up stomachs. 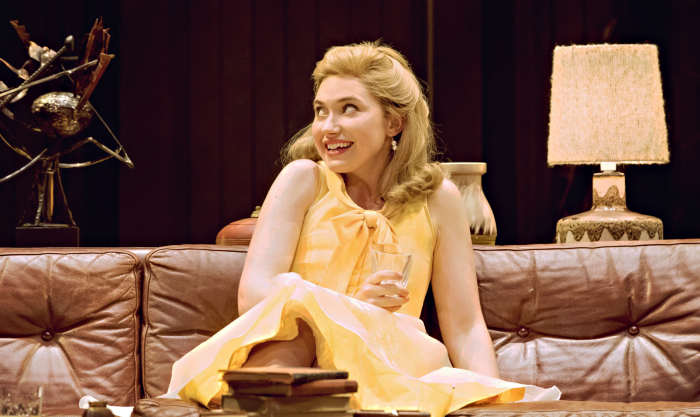 Based on the simple premise of a late-night drinks party that comes to resemble a modern matrimonial equivalent to the flayed-alive horrors of Dante’s Inferno, Who’s Afraid of Virginia Woolf? is the most wickedly entertaining, most viciously nasty, most incrementally harrowing play in the American canon. And I’ve never yet seen an account of it that ticks all those boxes with such pen-breaking vigour. After a sluggish start to the New Year, it’s as if the West End has been dragged out of hibernation by some blood-stained, howling predator.

Central to the shut-up and listen, sit-up and watch, power of the piece is Imelda Staunton’s Martha, the New England college head’s daughter who has made it almost her life’s work to bawl out her frustrations with her lacklustre historian-academic husband George like an angry baby. Staunton’s specialism is the female monster who somehow hooks you in, unawares, to the pain and damage that lies beneath the snarling mask and winds up enlisting your sympathy.

At the start, she’s the larger-than-life party animal licking her chops at the prospect of fresh prey (in the form of campus teaching-staff newcomer Nick and his dull-dutiful, doe-eyed wife Honey). Restless, volatile, at times put-on girlish, Staunton, gimlet-eyed and thin-lipped, flings out the put-downs like loose-change: “I swear if you existed, I’d divorce you”.

Thereafter, she passes through different phases of alcohol-assisted disinhibition (lust-lunging after the trim biologist) before winding up, three exhilarating-exhausting hours later, in a place of desolation: all malign passion spent and all vestige of the couple’s sustaining life-lie expired, the pun on “who’s afraid of the big-bad-wolf?” now chilled with thoughts of Virginia Woolf’s childless, suicidal end; their journey an epitaph, all told, on sterile post-war American affluence. 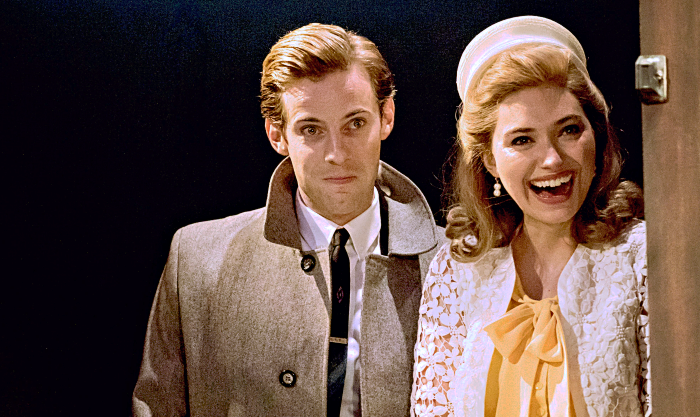 Bouquets, again then, for Staunton (why not yet a dame?), which isn’t to say she eclipses Conleth Hill as George. There’s nothing rote about this hen-pecked hubby’s bite-backs: like many a big fish in a small academic pond, he has evolved the teeth of a piranha. And while this grey-haired figure has the paunch and stoop of a man gone-to-seed, Hill keeps you guessing as to how defeated he is, what’s real, what’s artificial, what’s covertly conspiratorial. That said, the force with which, early on, he smashes a liquor-bottle gives some inkling of his impotent fury and his capacity (later made more explicit still) for physical violence.

If there was an award for Best Sozzled Acting, Imogen Poots, funny-touching as the clueless, condescended-to Honey, would win it. She makes her mark even when slumped on the brown leather sofa that sits dead-centre in Tom Pye’s spacious yet oppressive living-room (nicely rounded off with idly stashed books and tacky tube door-chimes). As Nick, Luke Treadaway musters just the right gleam of all-American promise and nicely registers its dimming as his elders’ bitter initiation ceremony wears on. A flawless production? Albee sworn to it.

Who’s Afraid of Virginia Woolf is playing at the Harold Pinter Theatre until May 27.