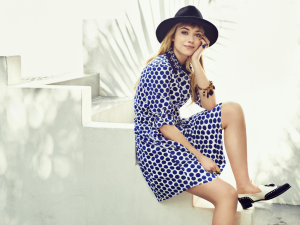 In a mad rush to get out of town, Imogen Poots is cleaning. Domestic organization has become something of a ritual for the actress before leaving her loft in New York City. “It’s so clean and lovely,” she says. “I like it to be nice when I get back, but when I’m actually living in it . . .” she trails off. Any messiness that may exist inside her apartment should be excused, though—especially this year.

Poots, 27, has been entrenched in work in 2016. The London-born talent has made stray appearances in everything from Popstar: Never Stop Never Stopping (the crass, Andy Samberg–driven satire of petty, megalomaniacal celebrities) to The Promise (a true-crime documentary about a murderous love affair). Then there’s her recurring work in Roadies (Showtime’s newest music drama) and about a half-dozen performances in films (The Sleeping Shepherd, I Kill Giants) coming out next year. The A.V. Club called her a “combination starlet and workhorse.”

Poots also possesses that rare quality of being both humbled by her success while still being interested in interrogating it. “I’m an actor for hire, you know? I think the last couple of years I’ve felt extremely fulfilled with the opportunities that have come my way,” she says. “You wish to play roles that continue to offer a chance to really disappear and ask questions about the human condition.”

She certainly pulls that off in Frank & Lola, a clever neo-noir in which Poots plays a recent college graduate looking to jumpstart her career as a fashion designer. To help her do that is Frank (Michael Shannon), a supportive lover and skilled Las Vegas chef. Soon after they fall for one another, chaos comes knocking at their door. The proceedings are more sinister than romantic: a slickly crafted caper wrapped in obsession, jealousy, and revenge.

Poots is enthusiastic about the project. “You occasionally have these experiences in life that you can look back at fondly, and say, ‘Wow, that’s what you turn up to do at work: to believe in something together and make it real.’”

Real is the operative word here, though. Throughout our brief conversation, we have a hard time drifting away from the current political climate. In short: reality. “There’s something to be said for when it seems like someone else has got ahead,” she says of President-elect Donald Trump. “It seems like someone has succeeded and therefore there’s the idea that since they’ve got a step ahead, we’ve taken a step back.” But Poots remains optimistic: “I don’t think that’s the case. You know, I’m speaking about women and minorities and anyone feeling discouraged. We haven’t taken a step back. We’ve just got to hold onto everything we believe in and be quite active about that.”

As an actress with a growing following, Poots understands her responsibility to participate in the future of this country. “I look at Lena Dunham, and I look at women of her stature and the reach they have,” she says, “and I think it’s very valuable that she uses her position in the way that she does.”

Many of Poots’s friends are planning to march in Washington on January 21, 2017, in peaceful protest of Trump’s inauguration. “I wish I could go very much,” she says. For now, she’s hoping to create change and conversation through her art. “The nature of this whole world is chaotic,” she says, not without some passion. “And every single human experience is entirely different from the next.”

“Every culture, every time, has its weaknesses,” she admits. “It’s important to keep surviving and working with what happens and doing as much as you can.” We know she will.