Imogen Poots talks 'manic directors' and being a Chekhov girl 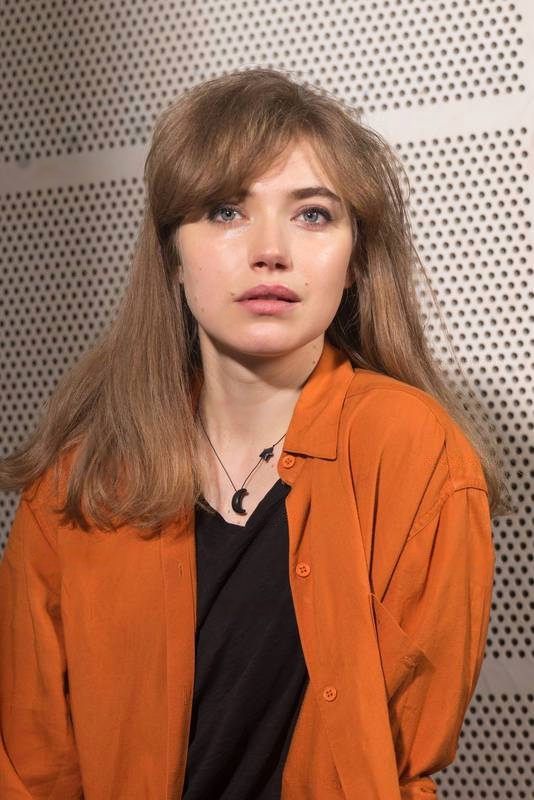 At 28, Imogen Poots is already a veteran of the big and small screen, having racked up 42 roles in everything from Jane Eyre to Bouquet of Barbed Wire, Michael Winterbottom’s The Look of Love to the video game spin-off Need for Speed, since making her debut in Casualty aged 15.

But the elfin London-born actress — who moved to New York after a brief stint in LA in 2011 — had never acted professionally on stage until director James Macdonald lured her back home to appear as the young foil, Honey, to Imelda Staunton’s monstrous Martha in his superb revival of Who’s Afraid of Virginia Woolf? earlier this year.

“I’d always thought, leave it [theatre] to people who know what they’re doing,” Poots says, “but then four years ago I started reading plays avidly. I’m a big Chekhov girl, and I’d had Shakespeare shoved down my throat at school, but I started reading people like Annie Baker, Amy Herzog, Young Jean Lee and Branden Jacobs-Jenkins, who are a sort of New York set, and I fell in love with Amy’s writing.”

After having “the best creative experience of my life” on Who’s Afraid, she mentioned to Macdonald that she’d love to perform next in Herzog’s play Belleville, which had been a success for Steppenwolf in Chicago and at the New York Theater Workshop near Poots’s East Village apartment. Lo and behold, this month Poots will appear in Belleville opposite James (Grantchester) Norton in a production at the Donmar Warehouse directed by Michael Longhurst. “When it came about I was, like, what?” she says. 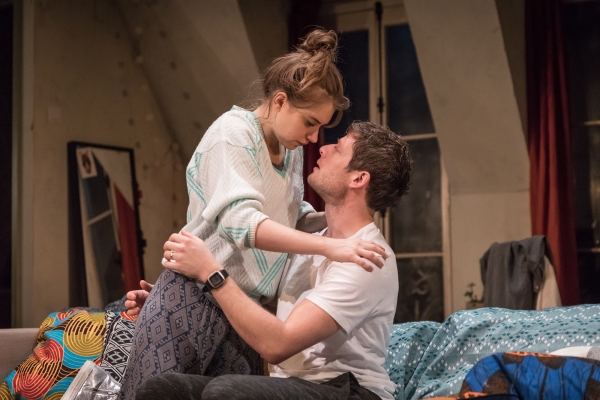 Imogen Poots and James Norton in Donmar Warehouse’s “Belleville” opening in the theater on December 14, 2017.
She and Norton play young American married couple Abby and Zack, a would-be actress and a medic who have moved to the titular Parisian district and rented a flat from a Muslim couple, played by Malachi Kirby and Faith Alabi. “It’s about a relationship and the discovery that you really don’t know someone at all,” Poots says, wary of spoilers. The Americans are privileged but oppressed by expectation, at sea in Paris and painfully awkward in their relationship with their landlord/neighbour and his wife. “It makes your skin crawl, but if you stick with it, it’s an extremely rich piece of writing,” Poots adds.

Though it was exhilarating to work with Macdonald and the cast on Who’s Afraid, the immediacy and changeability of theatre was initially terrifying. “I would sit in the rehearsals for Virginia Woolf and not say anything, just listen,” she says. “Here it’s a different vibe because we are all the same age, and I feel a different responsibility because of the nature of the role.” Of Norton, she says: “He takes his work extremely seriously and is a great partner in crime, but silly as a slug and great fun to be around.” Longhurst, meanwhile, is “extremely relaxed and lets you come to your own conclusions. That is a beautiful thing to be around because there are a lot of manic directors out there, which doesn’t help someone like me whose blood is already fizzing.”

Actually, I’m struck by Poots’s poise. She was brought up in Chiswick, her father a television producer and her mother a journalist. When I ask what she owes her parents, she wisecracks: “Well, I owe my dad money. But he also gave me books. And my mum instilled in me the idea that there isn’t really much to lose because the worst someone will say is ‘no’. So I am a big writer of letters to directors and actors because she deluded me into believing that was OK.”

Privately educated at Queen’s Gate School in South Kensington and Latymer Upper in Hammersmith, Poots got into acting through Saturday classes at Young Blood Theatre (other alumni include Carey Mulligan and Ophelia Lovibond). Squeamishness forced her to abandon her original plans to be a vet and she deferred her place to study history of art at the Courtauld Institute when she started getting acting jobs. Her first lead role was in the horror sequel 28 Weeks Later when she was 18, and the number of her credits since then suggests a Stakhanovite work ethic.

“The past few years, when I moved to New York, I started doing independent films,” she explains. “And you can’t get away with doing just one of those a year, otherwise you’d have to live on beans.” Early on, she adds, she was shocked and flattered to be getting roles and felt a pressure to say yes: plus it’s presumptuous to suggest that a young actor can afford to pick and choose.

She speaks fondly of working with Michael Winterbottom, and with Terrence Malick on Knight of Cups, but also mounts a spirited defence of lesser films. For instance, in That Awkward Moment she played Zac Efron’s girlfriend, merely there to support his character’s arc. “However, I still saw her as a real person, in a relationship that is a universal scenario that people might enjoy seeing up on screen,” she says. “But as I get older, and having done this for a while, you long for a rich character, and that’s why the plays are great.”

You’re still only 28, I say. “I don’t feel like a kid any more, though my mother thinks I need to revamp my wardrobe and be more sophisticated,” she says, looking down at her black T-shirt and chipped silver nail varnish. “I’ve been working since I left school, which has probably done something to my head. But I feel like an adult, I suppose. And growing up in London, you get more done [earlier] in terms of all the bad stuff, which is the good stuff too, in terms of drugs and alcohol. There’s a decade of fun, then you learn to take care of yourself a bit more.” She was in bed at 9.30 last night, she adds, having been out late the night before “but I just can’t do that stuff any more”.

Poots won’t be drawn further on the “good stuff” and she has also kept her love life impressively private over the years. But she was linked to Anton Yelchin, her co-star in the 2011 horror remake Fright Night. Yelchin died in 2016 in a freak accident when his car rolled over him, and she has his initials tattooed on her fingers. “We were best friends,” she clarifies. “He was an extraordinary human being.” She does acknowledge that it is hard to maintain relationships in a peripatetic industry, and too easy to get involved with fellow actors: “You want to be original and not fall into that hole.”

She has never experienced the coercive end of Hollywood’s gender imbalance — she entered a breakfast meeting with Harvey Weinstein forewarned and emerged unscathed — but points out that sexism is not just a problem in her industry alone. “As a woman in the world you see it all the time,” she says. “You get cat-called from a super-young age, even in London. The real problem is you get totally inured to it.

“I grew up with a working mum and dad so I witnessed a parity there but sexism is still totally pervasive. It’s changing a little bit in this industry, people saying we need to work with more female directors and writers. But you have to have a part in the conversation to try and change it.”

Poots may be part of that change. She’d like to do more plays, more films (she’s got four in post-production), “keep working hard and get better”. But she also hopes to direct in the future, and to write. “It’s just a matter of when to begin,” she says. “And that is such a silly question because I should be doing it right now.”