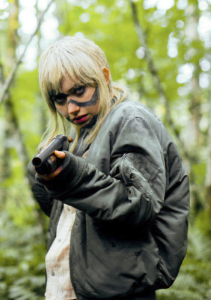 We recently spoke with Imogen about the punks vs.skinhead siege film… and what her desert island band would be.

SHOCK: I saw GREEN ROOM last year at Fantastic Fest. It really blew me away, everyone involved brought their A game. I’m curious what led you to want to be a part of this crazy film?
POOTS: It was one of the best things I had read. I had seen BLUE RUIN and wanted to be a part of something like that and play a role like that, where you can step outside and create something interesting.

SHOCK: The punk rock sub-genre is quite specific, with the look, the music and everything else. I grew up in that kind of scene and it was definitely intense. Were you nervous at all regarding the physical aspects, or were you Gung Ho, wanting to jump in there and shave your head?
POOTS: You don’t become an actor to explore vanity; it’s quite the opposite for me. I want to be able to play as many different characters as possible, so I’m game. I don’t really care what looks good not.

SHOCK: The one thing I loved was how in this film the concept of “violence breeds more violence” and how far people can sometimes go for their beliefs. Was that something that drew you to the project?
POOTS: I don’t think it was something I was drawn to. I think I was drawn to how things unfolded in the script and how it was constructed. I was interested in the mental faculties of the characters. And when Jeremy renders them useless, he is amazing in this type of genre. He uses suspense as a time to where you are condemned to watch human nature, and the use of every day suffering. It is so exhilarating to make and so exhilarating to see.

SHOCK: It’s very intense. It was like one panic attack after another watching the film.
POOTS: Yeah (laughing)

SHOCK: How was the experience of the actual filming of it? Was the performing aspect pretty intense as well?
POOTS: It was very intense, as it should be. There was no way the project was not going to be that way. I think it’s what you go to work to do. I think it was interesting, the moral sanity of the characters. Given that situation, that’s always intense. It was hysterical at times, not in a funny way. Just emotionally, especially the last couple of days filming. It was the new reality and you knew there wasn’t going to be a day when you were like “and now we are chill” the stakes were going to be high until the end.

SHOCK: When I spoke with Jeremy, he told me about his experience with the punk culture. Were you ever into that whole scene or was it something you wanted to research and sink your teeth into?
POOTS: Yeah, I had to research. Have you ever seen the documentary, SALAD DAYS?

SHOCK: YES!! I loved the hell out of that one.
POOTS: It was on Punk Rock in the Washington D.C. area. It talked about Fugazi, late in the film and all of the other bands in the scene. I loved how you were able to see how this person was in this band and it goes back, and back, and back. I was different growing up, I used to listen to KORN when I was thirteen, not ironically.

SHOCK: This is the second film you have been in with Anton, The first being FRIGHT NIGHT. How is it to kind of have a little reunion with this film?
POOTS: Oh, he is one of my best friends. We actually see each other all the time. He is so educated in film, I think he will direct one day. Working with him is exhilarating, he isn’t one of those people who does their job and leaves, he wants to help and learn. It’s the beauty of a companion who listens so intensely. It makes anything possible and it’s always great to work together again.

SHOCK: He did a film that I just love called LIKE CRAZY.
POOTS: AWWW, That’s a great film!

SHOCK: Yes! I just adore it! Definitely one of my all-time faves. It was cool to hear that you both were in this after FRIGHT NIGHT. This movie is such an ensemble piece. There are people that are playing way against type, and it’s great. Knowing Macon Blair, I would never have thought he, or Patrick Stewart would play those types of characters, it was such a surprise. How was it working with this ensemble?
POOTS: It was amazing because of normal delegation; there was none of “The Wimp” or “The Victim” they were more like real people. That is what I thought was so smart. I loved working with Patrick Stewart, he was full of grace. It’s a generational thing because someone like that is so classy. So generous as an actor and so funny.

SHOCK: In the movie there is the constant question: if you could only listen to one band on an island who would it be? If you were asked the same question do you have a band you would name?
POOTS: THE SMITHS! THE SMITHS were the first band to really knock my socks off. I was about sixteen and I bought THE QUEEN IS DEAD, I was so thrilled I never wanted to leave my house again. So definitely THE SMITHS would be my band.