Being the punk scream queen of this year’s goriest film 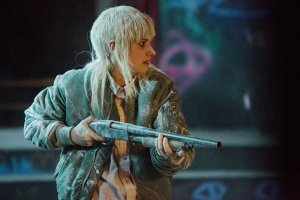 Imogen Poots is sitting on a bench in Tompkins Square Park in New York, but she’s meant to be in Los Angeles. “It’s a secret that I’m here,” she says. She’s snuck home to the East Village for four days in between shoot dates for Roadies, the long-anticipated first TV show by Cameron Crowe and executive produced by J.J. Abrams. “I really missed home, so I said, ‘I’m just going to pack my bags and leave.’ I got back to my apartment yesterday expecting to find cockroaches having a dinner party.”

Roadies, which premieres on Showtime on June 26, stars Luke Wilson and Carla Gugino at the head of an ensemble cast including Imogen as well as, intriguingly, the chart-topping Ohio-bred rapper Machine Gun Kelly. The ten episodes will follow the backstage and between-stop dramatics that play out during a stadium rock band’s tour across America. Poots plays Kelly Ann, an electrical technician, who, in the show’s only released trailer so far, coolly navigates arena back corridors by skateboard and dispatches arch life advice in tour bus cabins. Her hair throughout is swept back behind a black bandana, suggesting a kind of soulful, alternative but all-American, pluckiness.

“It’s such a new experience for me, I’m just still trying to figure out how I feel about it,” Imogen reflects; like it is for Crowe, Roadies is her first television project. “But I love Cameron so deeply. And it’s certainly different doing something with this kind of longevity attached to it.”

Roadies could not be more different to Green Room, the punk horror movie in which Imogen is currently starring, its cinema run overlapping with that of another recent Poots project, Terrence Malick’s Knight of Cups.

Directed by Jeremy Saulnier — a followup to his moody revenge thriller Blue Ruin — Green Room is a visually beautiful, relentlessly brutal, slasher that kicks off when a young punk band, The Ain’t Rights, gets a gig playing a dankly foreboding venue in the backwoods of Oregon that’s heaving with neo-Nazis. The ensuing siege situation unfolds almost entirely in the graffitied insides of the venue, giving the action an aggressively intense focus, amped up by merciless screenfuls of gore. Patrick Stewart, who plays the skinheads’ leader, recently said that midway through reading the script for the first time, he had to check that all the windows in his home were locked and that his alarm was set.

Poots, at one point, slices open a man’s stomach — with a box cutter, no warning, and alarming intentness. Her character, Amber, is a skinhead affiliate who becomes a temporary ally of The Ain’t Rights. I bring up the box cutter moment and she apologizes, “Oh god, I’m so sorry. I keep forgetting how intense it is for people who are seeing it for the first time.”

Imogen has gravitated towards films that land somewhere on the horror-movie spectrum — from one of her first acting credits, in 28 Days Later, to the psychologically grueling Cracks and 2011’s Fright Night. “I think any film in which you’re playing a real emotional human being, that’s just something that comes along with it,” she says about taking on highly intense roles. “Something I find interesting is why we as a culture accord such a high value to tragedy, on screen and in theatres. There’s a reason and it’s because we see the unendurable be endured. That’s a universal fascination and it’s a very rewarding thing to witness and be a part of. I think that’s why, as an actor, I find it very addictive.” She gives a faux-serious, quote-unquote delivery of the word “actor,” as if she doesn’t really identify as being one of them — let alone one who is currently appearing in a Terrence Malick film.

It was clear from her opening cockroach joke that Imogen is funny. She’s also well-read and unapologetically smart (she makes parallels between Green Room and Lord of the Flies and Greek tragedies). And in the balance of the two, she comes across as easy going in a way that perhaps you have to be when your job requires playing characters who wield box cutters and noxious political views.

Imogen explains that she tried to humanize her character in Green Room (“I had to defend this person to some extent, which I think you always have to try to do”), but she acknowledges that portraying a white supremacist meant going to a dark place. “I had to justify why she was hanging out with these people,” Imogen says, “So I did develop a backstory. I didn’t go as far as, “She really likes to have oatmeal in the morning!” but I did in the sense of a simple foundation for why she is the way she is.”

One thing she could identify with easily, though, was the film’s rootedness in music. While the predominant soundtrack in Green Room is actually reverb and the snarling of pit bulls, Saulnier developed the movie partly as a way to explore his own experiences in teenage punk bands. A recurring joke in the movie stems from an amatuer radio interview in which The Ain’t Rights are asked what each of their “desert island bands” would be. Imogen’s, she says, would be The Smiths.

“The first thing I did when I got home last night was just put on music really loud and sit down. That to me is one of the happiest places I could ever be. And The Smiths are very important to me. Johnny Marr in a hammock on a desert island would be nice.” She adds, “I also love Johnny Cash,” and wonders if the three musicians would get along. They could be a supergroup, she suggests, like The Traveling Wilburys.

In her typically low-key way, one that suggests genuine normalcy, Imogen explains that emotionally coming down from Green Room wasn’t really something she had to consciously do — continually recalibrating is part of being an actor — but that there is an afterburn from a role like that. “You inevitably think about it a lot. So it’s just being cautious about why — why you’re still thinking about something a lot. I do think there are many aspects to this job, not just the creative part, which will fuck you up or torture you in some way. After [wrapping this], I think it was Thanksgiving, and I came back to New York and went over to my friend’s house and roasted Brussels sprouts.” “And that,” she concludes, “was the end of that chapter.”