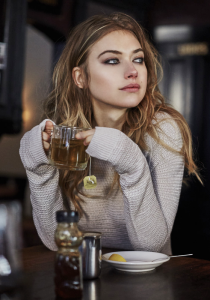 First, a disclosure. Personally, I am massively fond of Ms. Imogen Poots. There is good reason for that. Without her help, and her courage, at a very specific and delicate time, the film I’ve been trying to make for the past decade called Frank & Lola would have fallen apart, almost certainly for good. So I know firsthand what this 26-year-old with an unnervingly old soul is capable of—as an actress, as a human, as an artist—and trust me, it’s rare, and worth your attention. Take Grace Kelly, mix in a little Annie Hall, add some pixie dust and a bit of British je ne sais quoi and Immie (as she is known to everyone who’s ever met her) materializes. Also, she’s a blonde. Hitchcock would have loved her.

Born and raised to a pair of journalist parents in London’s Chiswick district, Poots has lived under the industry spotlight ever since her first speaking role, at just 17, with a fearless, precocious performance opposite Robert Carlyle in 28 Weeks Later, Juan Carlos Fresnadillo’s impressive follow-up to Danny Boyle’s visionary digital-video horror epic 28 Days Later. Young, beautiful, talented actresses are a very rare commodity in Hollywood, and Immie, who scored a British Independent Film Award nomination for her work, checked all the boxes. She signed with a major agency while still in her teens and was soon booking at least three films a year. Along the way, the fashion world fell in love with her, which led to modeling work (she’s currently the face of Miu Miu) and regular appearances at shows and CFDA balls. At 22 years old she made the obligatory move to L.A. and more work followed, a balanced mix of studio gigs (2014’s Need for Speed) and prestigious indies (film god Terrence Malick’s upcoming Knight of Cups). But something still didn’t feel right. A change of location was in order.

At the end of 2013, Poots went with her gut and moved from Los Angeles to New York. That’s when everything began to fall into place. “Moving here just felt like the right thing to do,” she says over yet another dinner at the West Village outpost of Frankies Spuntino, the famed Brooklyn eatery. (The restaurant’s co-founder, Frank Falcinelli, served as the inspiration for my movie’s hero, a chef from Queens who’s since moved to Las Vegas, which is where he meets the elusive Lola, played by Poots.) “I first came here at 19, and I just fell in love. When I walk down Broadway, and I pass those stands with the roasted nuts—that smell is just so comforting, even though I’ve never bought them, ever,” says Poots, who now calls the East Village home. “In New York, you’re surrounded by a group of people who put the creative element first. This industry can be a really thrilling place to be, but there’s also another side to it that I don’t love. I don’t feel that side when I’m here, where actors, writers, directors walk into a room and then just get together and do it. I’ve never felt happier or more at home anywhere.”

By the time I met Immie at the Bowery Hotel early last summer to discuss my eight-years-in-the-making film, she had already made the dive headfirst into the creative inspiration New York provided her and firmly taken the reins as architect of her own career. I told my financier at the time that I wanted her to play the lead role in my film. He was so impressed by my pitch that he insisted that she was the only actress for the part, but that we had to go into production before the end of the year or all bets were off. There were a couple of problems with that ultimatum: Immie had already booked back-to-back jobs for the fall—Anna Axster’s A Country Called Home and Jeremy Saulnier’s Green Room—which meant there was only a three-week window in December that would work, and she’d have to drop out of another, bigger project she had committed to months earlier.

Immie made her choice, and a few months later we were in production. Despite arriving on set only a week after wrapping Green Room (which she started just a few days after wrapping A Country Called Home), she showed up in Vegas as ready as I could have ever hoped her to be and was, needless to say, an absolute dream to direct. Now it’s on me to finish the film in a way that does her extraordinary performance justice. No pressure.

“It was really incredible to work on three films consecutively that I was crazy about,” says Poots, who kicked off the year as the lead in Cameron Crowe’s much-buzzed-about pilot Roadies. “In hindsight, you recognize how much that you got done. It’s a reminder again that there are people out there who really love movies, and who have really weathered the storm of having been fit into a box and then got through it. This is a funny old job. You meet some extraordinary folk along the way.”