A starlet is born 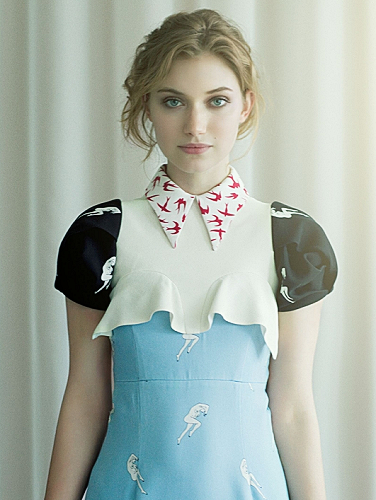 The 20-year-old actress Imogen Poots had ‘a bit of a moment’ last year when she was in New York making Solitary Man, a film about a college nymphet who seduces Michael Douglas. She was waiting to perform her bedroom scene – ‘It’s a scandalous scene as I actually play the daughter of Michael Douglas’s girlfriend [Mary-Louise Parker] who he’s just dropped off for her college interview’ – when she looked out of the window and saw the Statue of Liberty, then looked down at herself and saw modesty-preserving beige underwear and beige nipple ‘flowers’ and, quite reasonably, thought to herself, ‘What am I doing?’

The answer is: making quite a name for herself; this is just one of six major films Poots has coming up, from Centurion, in which she plays a woad-covered wise woman, to Blanche Ingram in a big-screen version of Jane Eyre. It is easy to understand her popularity with casting directors. A beauty in the mould of Vanessa Redgrave circa Blow-Up (1966), Poots has a constantly changing, challenging face and blazing blue eyes that widen at the suggestion that the May-December age gap in Solitary Man is a little, well, gross. ‘No, because my character was very much in control of the situation, which I enjoyed,’ she explains.

Born and brought up in Chiswick in a house ‘crammed’ with books, ‘Immie’, as she is known to her friends, went on frequent theatre trips with her mother Fiona and her younger brother Alex; her father, Trevor, is a current affairs TV producer who works with Sir David Frost. ‘It’s nice to talk to my dad about work, because we share an understanding, but I’ve never been on set with him and he’s never been on set with me.’ She attended Bute House School for Girls, Queen’s Gate School and finally Latymer Upper School, although TV parts took her away from school dramatics – missing out on playing Puck is still a regret. Her first professional job was in Casualty, aged 14, as an underage pregnant girl (‘the poor director had to explain to me what toxic shock syndrome was in the audition’) and next came another challenging part, a persecuted lesbian schoolgirl in the Wachowski brothers’ V for Vendetta. No kissing was required – an older actress stepped in for the racier scenes. 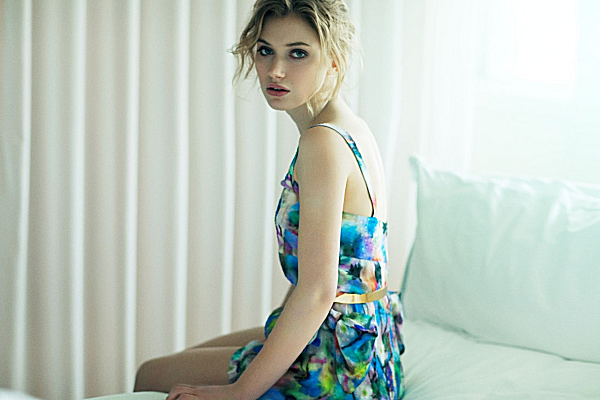 ‘If you’re savvy and strong you can avoid exploitation, but if you’re naïve you can be taken advantage of very easily in this business,’ she says. ‘I’m lucky in that I have close friends and family and my agent to advise me.’ What has she turned down: men’s magazines? ‘Yeah, I’m definitely not into that. Also’ – she laughs heartily – ‘I’m not sure I really have the right equipment to deliver.’

Her breakthrough role (and only her third) was the lead in 28 Weeks Later, the grisly sequel to Danny Boyle’s hugely successful plague thriller 28 Days Later. She played Robert Carlyle’s daughter and gave a lovely performance, controlled yet expressive, and praised even by critics hostile to the film. Imogen has ‘the happiest memories’ of filming, and Regent’s Park is still her favourite London park, even though it was where she took part in a zombie massacre carried out by helicopter blades. ‘Bodies and stumps were everywhere; I thought about it fondly the other day while I was going round the lake in a pedalo.’

However, Imogen has started to learn – whisper it dramatically, please – the price of fame. She had barely left school when she won parts in the hit Me and Orson Welles and in Cracks, starring Eva Green. Such success doesn’t necessarily endear you to your peer group. ‘Very few are close friends in the sense that they’ve never changed,’ she says thoughtfully. ‘There are some who stick around and stay true and who you grow with, and some you grow apart from. I think you go through life and you collect some people for the journey, don’t you?’ She has just moved into a flat, alone, in Earls Court. There is a boyfriend, but he’s nothing to do with the industry and has been in her life since last year.

On screen, she is about to be paired with Michael Fassbender for the second time. In the forthcoming Romans vs Celts blockbuster Centurion she plays 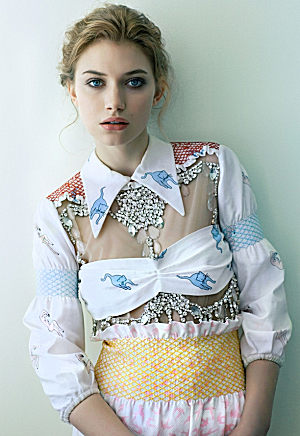 Arian, ‘a necromancer who’s very into her herbs and remedies. I spent a lot of time hanging out with goats in a hut. The smells really made you feel in the part.’ She heals David Morrissey’s wounded knee ‘with a piece of thyme’, but she is, she admits ‘essentially a potential love interest for Michael Fassbender’.

Their chemistry will be reprised this summer when she plays Blanche Ingram opposite Fassbender’s Mr Rochester in Cary Fukunaga’s Jane Eyre. Fukunaga says he saw her playing Jane Austen’s niece Fanny in Miss Austen Regrets for the BBC and was impressed by her sense of period. ‘You can tell there’s a lot going on behind the eyes, a fierce intelligence and humour. In Jane Eyre, she’s an accomplished young lady who has to sing 1830s operetta and I asked her how she was going to sing it and she said, “Like Johnny Cash?” which I thought showed her sense of humour, which seems quite zany. I’m really looking forward to seeing how her face works on camera.’

As for Imogen, she says of her haracter: ‘Blanche is self-obsessed and conniving and feels she can walk in and claim Mr Rochester. She’s obsessed with class and money and she’s pretty irritating as a person. I think everyone’s met a Blanche, once or twice…’

Imogen has deferred a place to study History of Art at the Courtauld for two years – ‘they’ve been wonderfully accommodating’ – but she still thinks she will want to go to university and has a lasting love of art, inspired by her favourite teacher at school. Mr Worman, Imogen Poots salutes you. One of her favourite haunts is the Rothko Room at Tate Modern, where she loves to sit contem-platively, Fleet Foxes playing on her iPod.

‘I’m a big Johnny Cash girl. And I love singers like Laura Marling and Joanna Newsom. I think the folk renaissance that’s happening at the moment is really great. A couple of my friends work in the music industry so I’m literally the one tagging along with the uncool vibe.’ She likes
pubs around Angel – The Bull’s Head, The Lexington and Filthy McNasty’s – that showcase up-and-coming bands. ‘Those kids that you see hanging around there wearing funky T-shirts and plaid shirts? That’s my scene.’ Her definition of funky, in this case, is a T-shirt with the appliqué face of a cat on it. ‘And lots of glitter. Yeah. For sure. In terms of fashion, I’m at a bad stage.’

Like any focused young actress, Imogen has an intellectual crush on Woody Allen. ‘I just love him and Diane Keaton and Mia Farrow.’ She considered sending him a Valentine’s card but settled for a heartfelt letter. ‘It was all about how I thought I was going blind, but it turned out it was just a minor hayfever allergy. I started the letter saying: “I wanted to write to you before something happened to either of us” My brother said I shouldn’t have written that as it made me sound like a stalker. But it’s too late now. Maybe I’ll hear back from him one day.’

Other heroes include actresses Rose Byrne, who was ‘absolutely charming’ on the set of 28 Weeks Later, and Hermione Norris, who plays her mother in the forthcoming remake of ITV’s notorious incest drama Bouquet of Barbed Wire, along with Trevor Eve. ‘Hermione was just amazing. The script at times got so down, and the storyline was so dark, and she was there always checking that I was OK.’

Imogen was fine: she finds it helps not to draw on her own history or look too deep inside herself. ‘I never personalise anything because I think that can be dangerous. For me the best way is – this may sound pretentious – but it’s to breathe the character and get into the psychology of it.’ And with a hoot of laughter, as a parting shot she gives me her other favourite motto, ‘which Mrs Poots gave me, before I started working with all these big names. “Just remember,” she said, “everyone wore a nappy once.”‘